All Craft&Ride® products are Crafted To Last™ and backed by the Craft&Ride® Lifetime Warranty.

All Craft&Ride® products are Crafted To Last™ and backed by the Craft&Ride® Lifetime Warranty.

In order to scale, you must do the unscalable. Listen to how Co-Founders, Mike and Nick Vitale, built Craft&Ride on the Creator All-Stars Podcast on Callin, Apple Podcasts, and Spotify.

This is our story. Craft&Ride LLC was founded on April 14th, 2017, by Co-Founders Mike Vitale, COO, and Nick Vitale, CEO, in Rancho Cucamonga, California. Mike and Nick are a father and son duo with an intense passion for innovation. With Mike’s background as a 27-year technology executive for well-known brands such as AT&T, Research in Motion, and multiple successful startups, and Nick’s self-taught deep understanding of the online landscape as a Computer Science major at the University of California, Santa Barbara, and the help of their close-knit Craft&Ride team, Mike and Nick have built a behemoth of a business extremely focused on the importance of each customer’s experience and personal relationship with the Craft&Ride team. With the customer always at the forefront, Mike and Nick continue to lead Craft&Ride with certainty that the world will love what they create because they create what they love.

At a young age, Mike developed an appreciation for skateboarding and snowboarding, and would compete in local skate competitions across Southern California. His strong passion for skateboarding would persist throughout his life and lead him to discover his first ever electric skateboard in 2010. The idea of an electric skateboard was something out of the future for Mike and riding would quickly become a large part of the time Mike and Nick would spend together. In early 2014, Mike would discover the official Kickstarter created by Future Motion Inc. for the Onewheel Self-Balancing Electric Skateboard. Everything Mike had loved about skateboarding, snowboarding, and electric skateboarding, had been packed into the Onewheel and Mike knew his life would never be the same.

In early 2015, Mike and Nick began to ride Onewheel. The Onewheel was everything Mike had loved about skateboarding, snowboarding, and electric skateboarding, all at once, and more. As innovators at heart, Mike and Nick began to question how they could push the envelope and enhance their Onewheel riding experience. They identified that the stock foot pads of the Onewheel were completely flat, unlike the concave shape of a skateboard, and believed that the Onewheel would benefit from the addition of a concave foot pad. To put their idea to the test, Mike and Nick grabbed the nearest full-size pool skateboard in their garage, sawed it in half, and drilled four screw holes into it. They replaced the flat stock foot pad of their Onewheel with their makeshift concave deck. As they had envisioned, their makeshift concave deck completely enhanced their riding experience by providing a new level of comfort and control. They were able to use their toes and heels to push up against the edges of their concave deck to take complete control of their Onewheel and carve like never before, and their feet were the most comfortable between the concave pocket-like shape and kick of their makeshift deck. The first ever concave foot pad for the Onewheel was born, but the work was far from over.

Mike and Nick would continue to iterate on their design and develop a new manufacturing process that would allow them to produce their concave foot pad from the ground up, starting with seventeen plies of hard maple wood veneers that were pressed, machined, hand-beveled, stained, and sealed with love in Southern California. The OneTail was born and the Onewheel community was about to discover a completely new riding experience.

Mike and Nick would quickly share their creation with friends that they had met within the Onewheel community. Every rider that tried the OneTail believed that the addition of the OneTail to the original Onewheel completely enhanced their riding experience and increased their level of comfort and control. Every rider asked how they could buy one, and Craft&Ride was born.

Mike and Nick launched Craft&Ride LLC on April 14th, 2017, with their first product, the OneTail. The OneTail was met with high demand from the community. Mike and Nick quickly identified the need for aftermarket Onewheel accessories and began to think bigger.

Mike and Nick would continue to execute on their ideas and build out the largest selection of premium aftermarket accessories for the global Onewheel market through the development of countless Craft&Ride branded products and the establishment of grassroots partnerships with other entrepreneurs within the community.

With customers in almost every country of the world, Craft&Ride is the market’s first destination when searching for the next experience elevating product. But what has put Craft&Ride at the forefront of the Onewheel community is so much more than its products. It is Craft&Ride’s undying appreciation for each rider within the Onewheel community and attention to each rider’s experience. In an era where companies avoid sharing their phone number, Craft&Ride’s CEO, Nick Vitale, plasters his personal phone number everywhere to ensure that his customers have a direct line of communication to him. He, Mike, and the entire Craft&Ride team work tirelessly to put the customer first. The customer is always number one to Craft&Ride and the team will go to great lengths to ensure that this remains true.

Craft&Ride continues to contribute to and shape the culture of one of the world’s fastest growing electric board sports as the leading provider of premium aftermarket accessories through constant innovation, elevated design, efficient manufacturing, and paramount focus on the rider’s experience.

I’m new to the Onewheel float life and I hardly order online besides Amazon. I just got my pint and was excited to know that I could buy custom parts. My friends thi and thai introduced me to craft and rides website and I was like a child in a candy store! First off I wanted to buy a new Carbon fiber fender. Bam found it and ordered it asap! Little did I know I got the wrong one and I was freaking out. New to online shopping. Anyway after ten minutes of realizing I ordered the one for the xr and not the pint I emailed the customer service dpt to let them know I ordered the wrong one and if it was possible to send the right one since I emailed them asap. No luck all day. Was taking it as a loss. Then Nick emails me and was like, we got to your order before it went out! Talk about bad ass customer service yo! He even texted me back as well to let me know we were good to go with my correct fender. Dudes a legend thanks Nick!!! Next up I’m getting new footpads and rails and a tire! 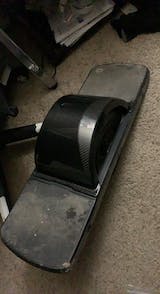 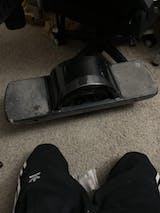 While I was reading the instructions for how to mount the little steel tabs on the rails I was wondering why they were so...careful...explicit about placement/alignment...but when I put it all together and snapped the fender on I understood. (not that I did it wrong...so how would I really know)...but when you do it the way they said to do it...it sticks as well as if it were glued on. It super firm, no rattle at all...and it's nice to be able to just pop/pry it off if you need/want to. The quality actually feels a little better than stock...the finish is better, the plastic feels slightly less brittle. It is 100% the thing to buy...I only wish I'd been bolder and hadn't just gone for the black. Yellow...I should have gone for the yellow.

I ordered a Burris all terrain treaded tire. It went on my onewheel very well. And was so much better than the stock tire. Will buy again.

These guys are amazing very fast service some personal touches 10 stars for sure… I’m a Alabama fan so this is my Bear Bryant edition thank you. 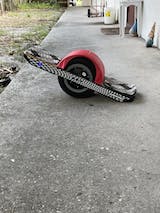 A
Craft&Ride Anonymous (Grand Junction, CO, US)
#1 shop for onewheel

What a difference the ride is with an Enduro vs stock tire! I’m so glad that I took the plunge and bought it since my stock tire only has about 100 miles on it. Still being a noob… I was uncertain would the new tire be noticeably different. So happy that it is!
My only complaint is that normally I have the fender on my OneWheel XR, you cannot see the cool layout design of the tire…. But the ride itself is beautiful!